For my eagle scout project, I decided to make 7 electronic kits for the local schools of Penang, Malaysia. I chose the PSC (Penang Science Cluster) as the organization to aid me with this project as they are a non-profit that aims to promote STEM in the local community. Along with great facilities, they also provided us with lots of volunteers to help us out.These prototypes will then be mass produced at industrial grade. We needed to design something that was affordable, durable, and easy for the students to get their hands on and experiment.

After a lot of designing and testing we were finally able to come up with a complete kit that looks like this: 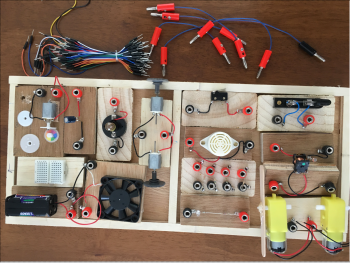 We decided that our launch schools that would be initially receive the prototype kits would be: SMK Hutchings, Penang Free School and Saint Xaviers. Each school will receive two kits.

In order to ensure that the kids would use it with ease, I decided to test it at the opening of tinker town (an exhibit at the PSC) because I knew that a lot of kids would show up to the event allowing me to conduct a beta test.

After evaluating the feed back we received, we made some tweaks and we came up with a final prototype. The only problem was we needed to replicated six times and we didn’t have any time to do it ourselves. So we decided to plan a student day where 10-15 kids from each school would come in and help us build the kits which they would later (after we fixed and polished them off) get sent to their schools. This also gave the students a unique opportunity to learn useful skills such as soldering and learning how to use a drill. And thanks to generous donations from the PSC was made free of charge to the students and the schools. Here are some of the photos from the student day: 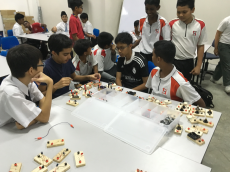